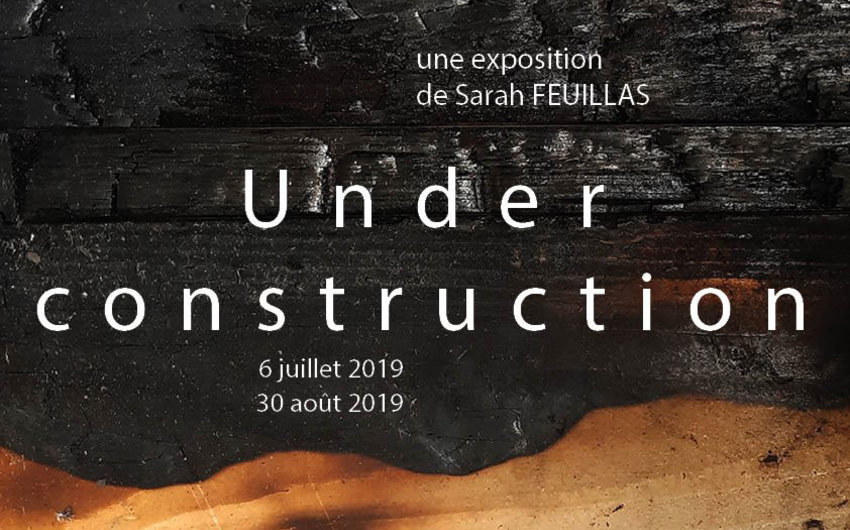 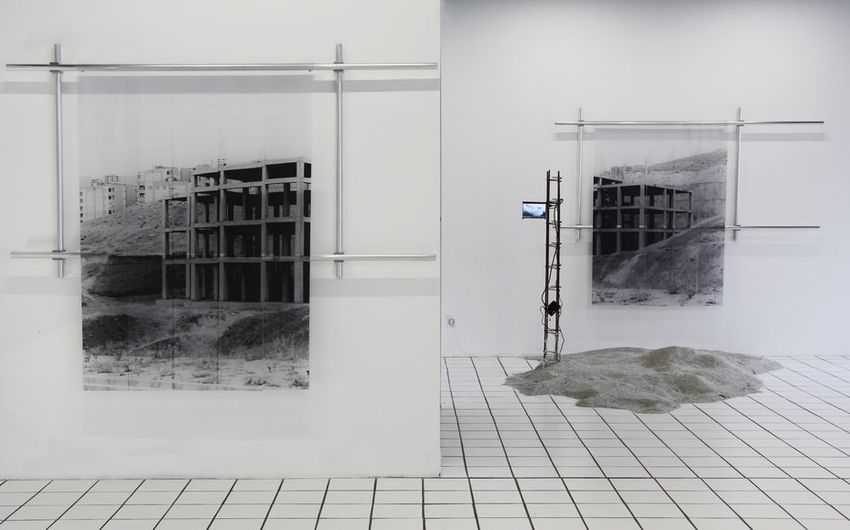 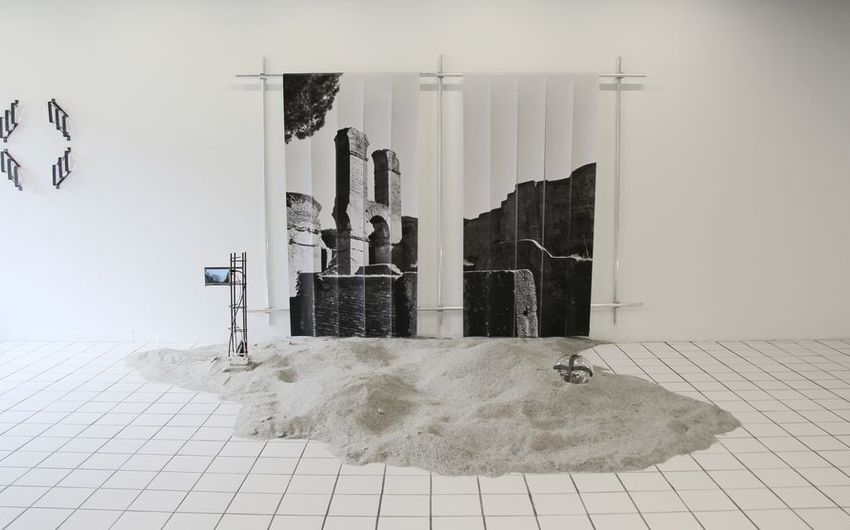 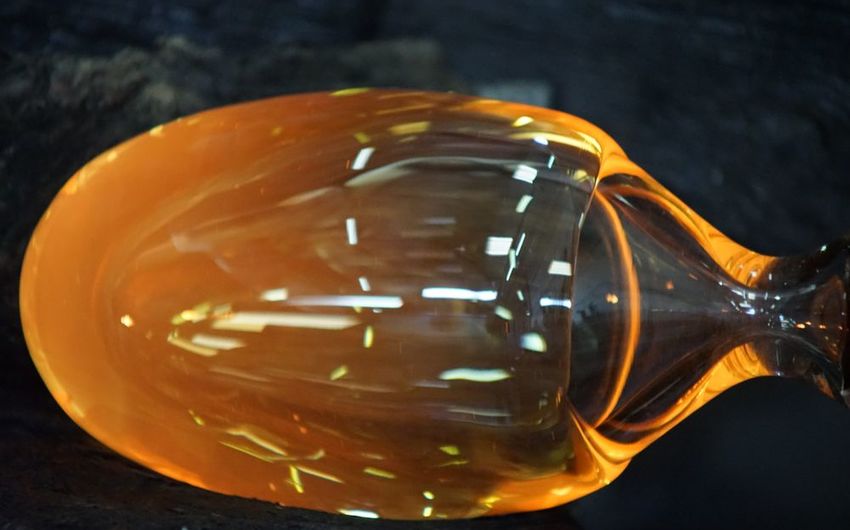 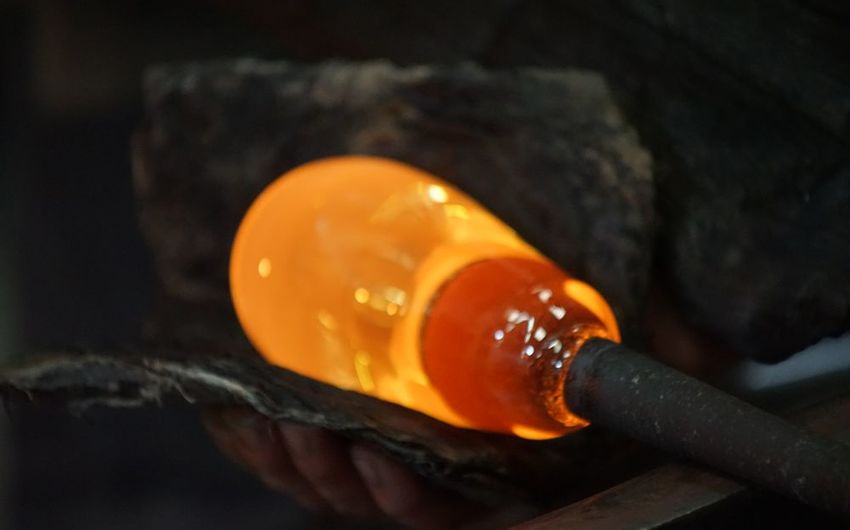 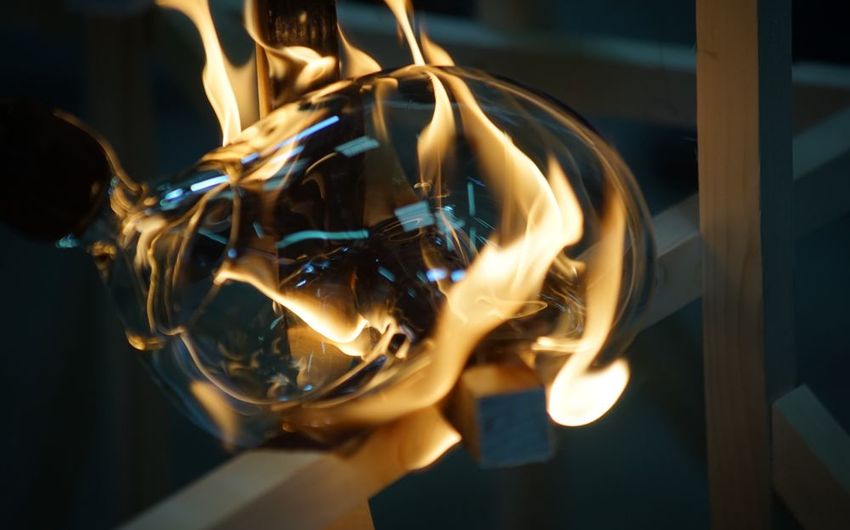 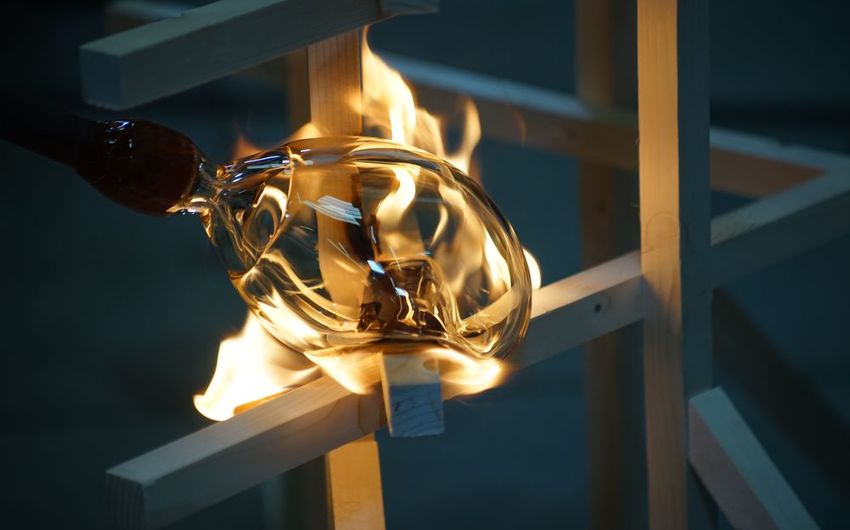 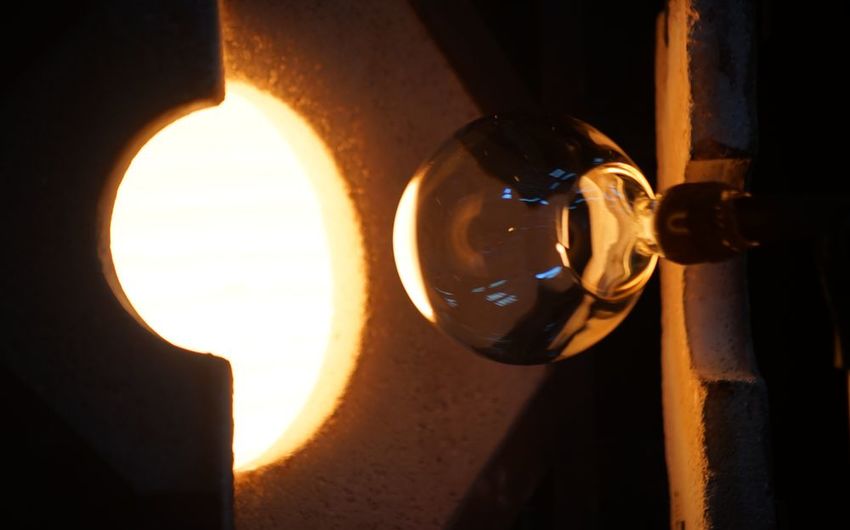 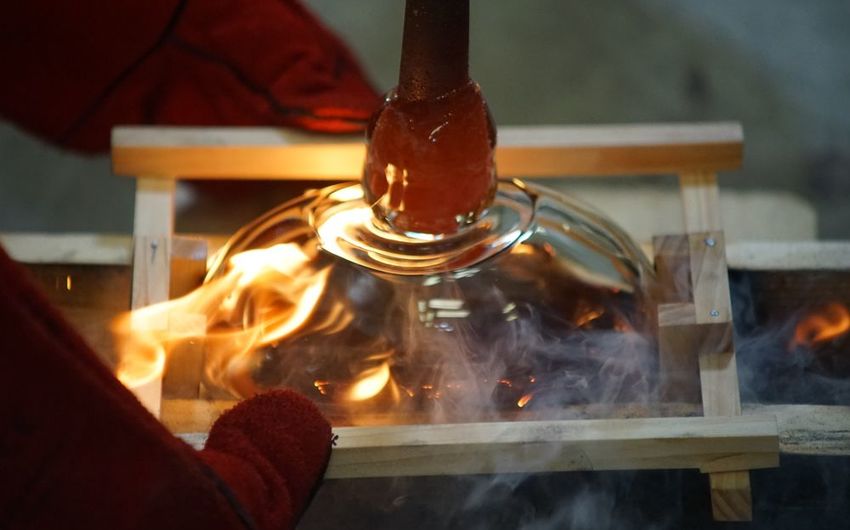 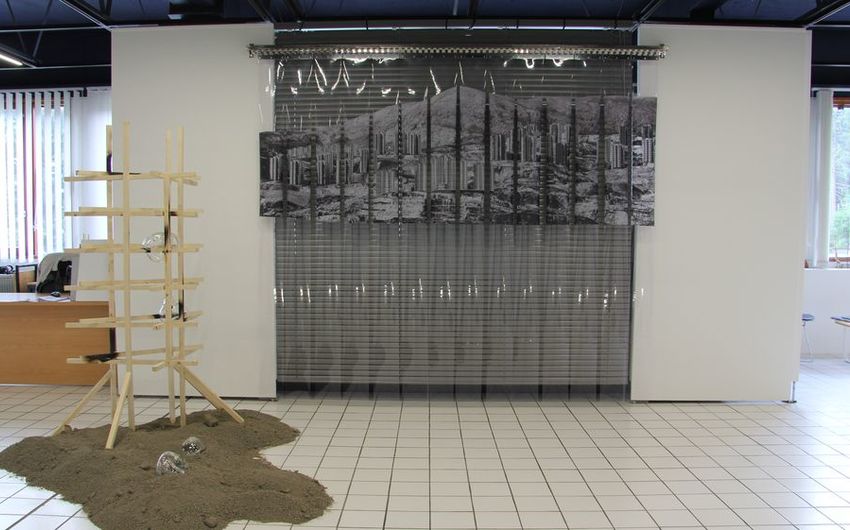 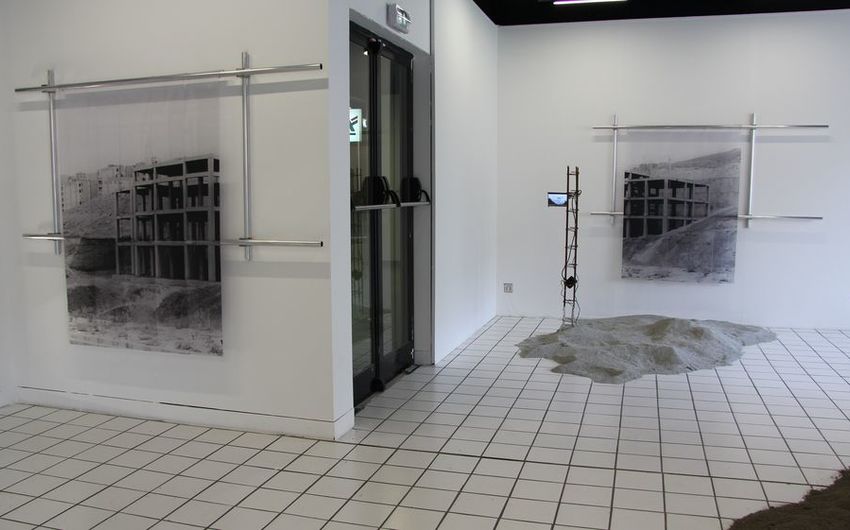 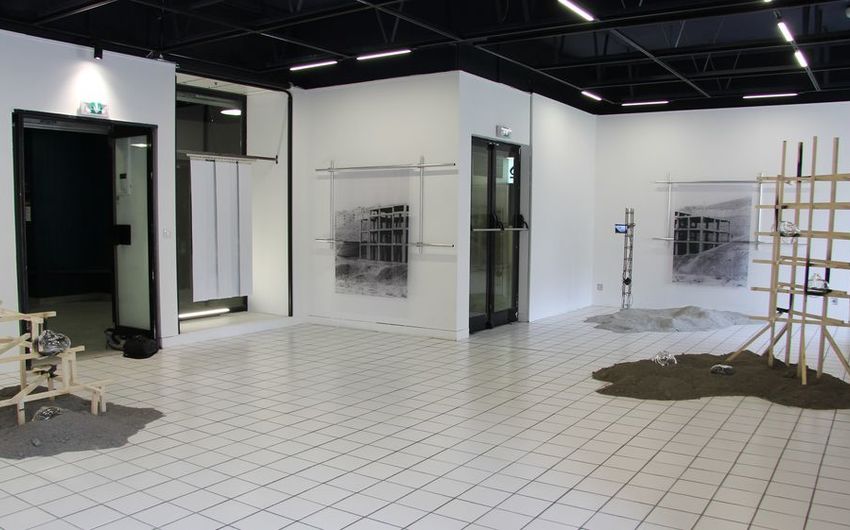 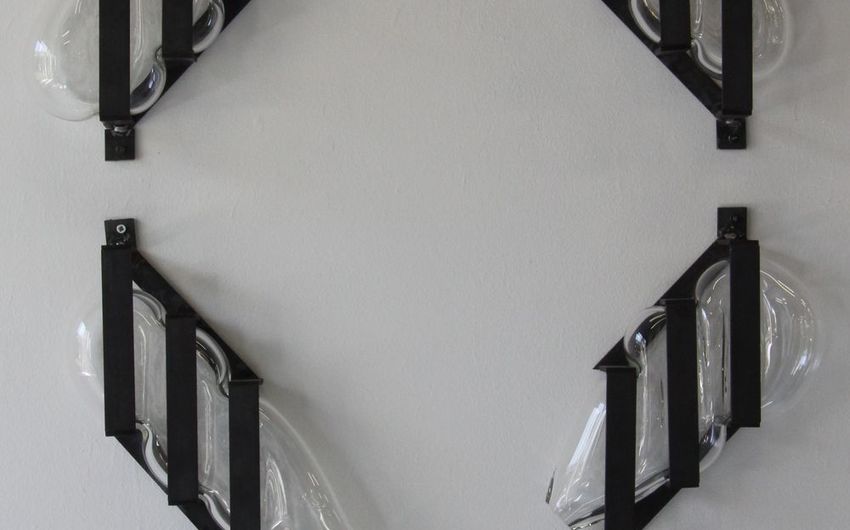 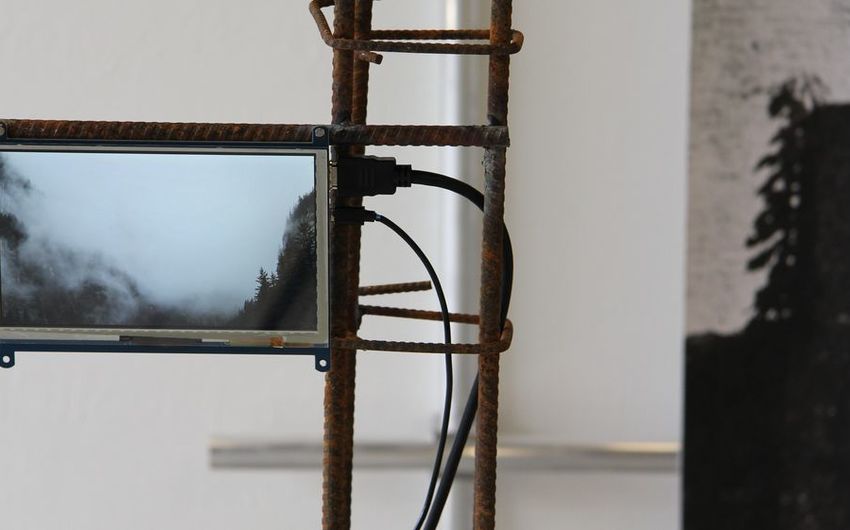 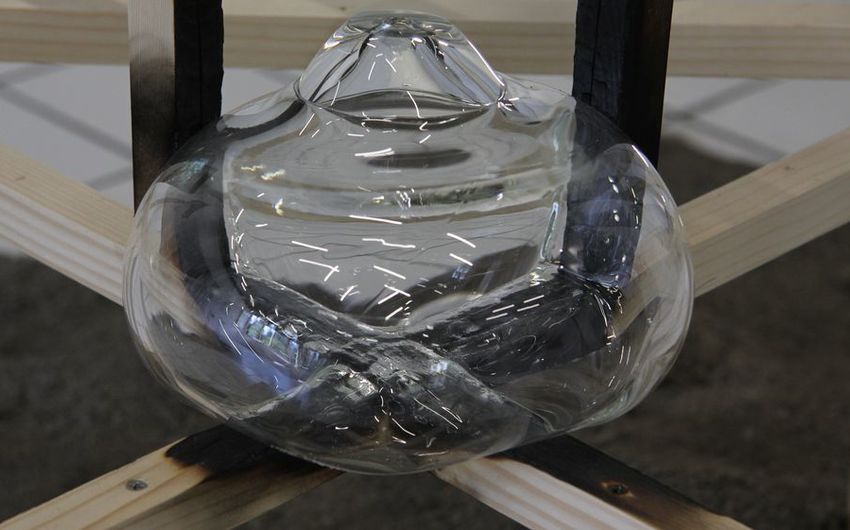 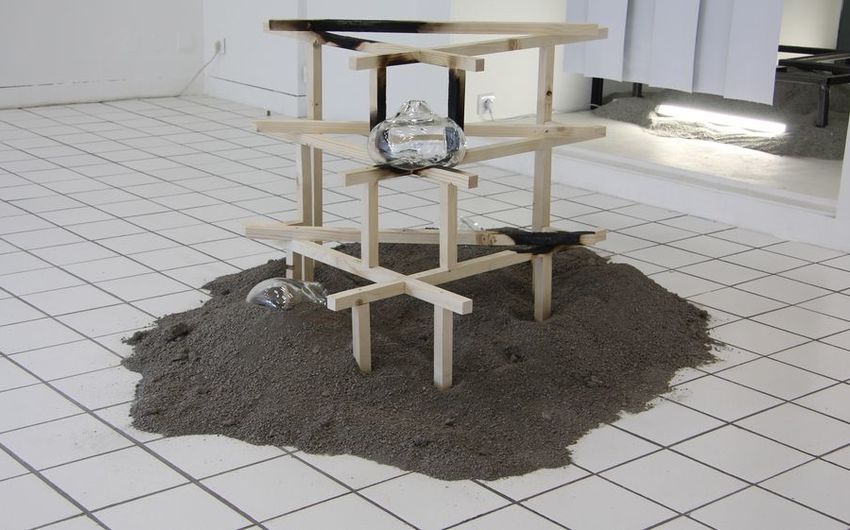 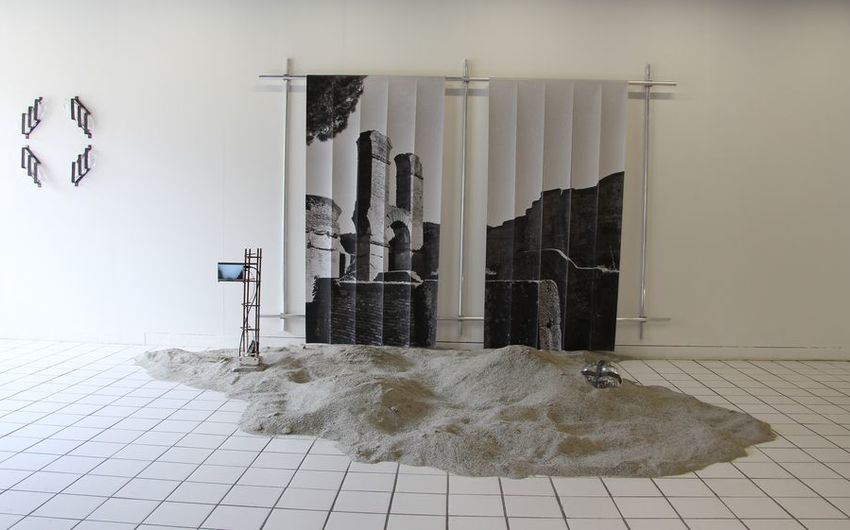 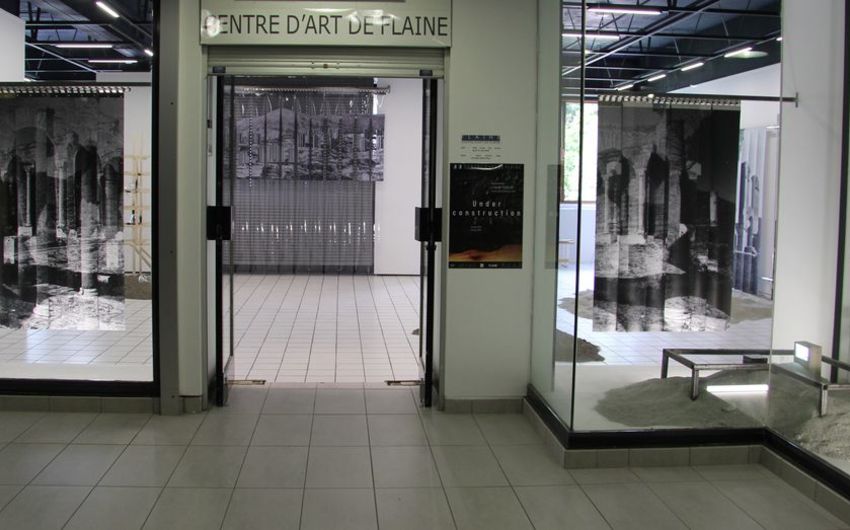 “We shape our buildings, thereafter they shape us.” (1)

When the glassblower brings his hose towards the mold shaped by Sarah Feuillas, the temperature starts to rise. You can feel the tension. Although Feuillas has designed the mold, she never really knows what is going to happen during this process. The molten glass expands slowly and penetrates the empty spaces, and as these fill with translucent matter, the molten glass begins to modify the structure of the mold.

Sarah Feuillas allows the different substances to transform each other, while retaining an element of control over the process.

Whether made of wood or metal, the molds are always the result of a synthesis of shapes discovered when putting together the exhibition. For example, for ‘Under Construction’, the structure of the wood (Rose Up, 2019) is a spatial development of the floor tiles. Her series of sharp edges is a reformulation of the parallelograms imagined by Marcel Breuer - the architect of Flaine - in 1969. Another example is the use of metal scaffolding tubes (Screenplay, 2019), which interact with the barrel-shaped hut designed by Charlotte Perriand and Pierre Jeanneret in 1938 and installed on the slopes of the resort.

Wood, metal, sand, PVC, plastic sheeting... The materials Feuillas uses are primary elements of the early stages of a construction, where the esthetic qualities of a construction site predominate. In our minds, constructions grow up from the ground before a building exists, and disappear after the inauguration has been announced.In this same exhibition hang images that take the form of black and white photographs showing constructions. Some are almost transparent, others cut into strips. We do not know much about them – are they ruins, abandoned buildings or under construction? – but we doubt less their origin than w

e do their future.

Whenever we come across a sign marked ‘under construction’, we tend to pause a moment, the information officially bringing a halt to our aimless wandering. However, this expression also takes us to another place, a different future, a further possibility. It is an announcement that something might happen.

You could say that this exhibition works in the same way. The ephemeral structures are a series of physical and visual barriers that define our wandering path. The images that they allow us to see are - on the other hand - windows through which to view the world, “an augmented 2D representation, a mirage” (2). For Sarah Feuillas, they give Flaine the opportunity to leave its status of an “enclave opening up to the world twice a year”. (3)

From Pardis in Iran to Ostie in Italy; from ancient Rome to the 21st century; everything here is a reference to the utopic goal that eventually became the driver for the construction of Flaine in 1969. There may not be an image of the resort itself, but its presence is everywhere, like the ghost-like images on display. In a way, being able to penetrate these images (via strips, transparency etc.), allows us penetrate matter, which in turn makes those utopias tangible.
Our eyes wander from island to island, from ‘scenario’ to ‘scenario’ across transparency and empty space, touching both manufactured elements and raw materials to form a mental architecture in which the images and the shapes make us question what it means to construct.

1 / “We shape our buildings, thereafter they shape us.”
Winston CHURCHILL pronounced these words during a speech in the House of Commons on 28th October 1943.