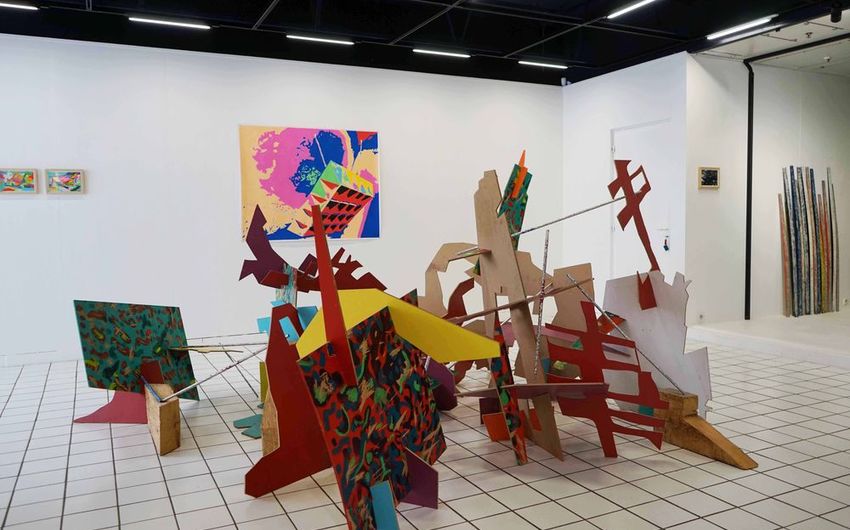 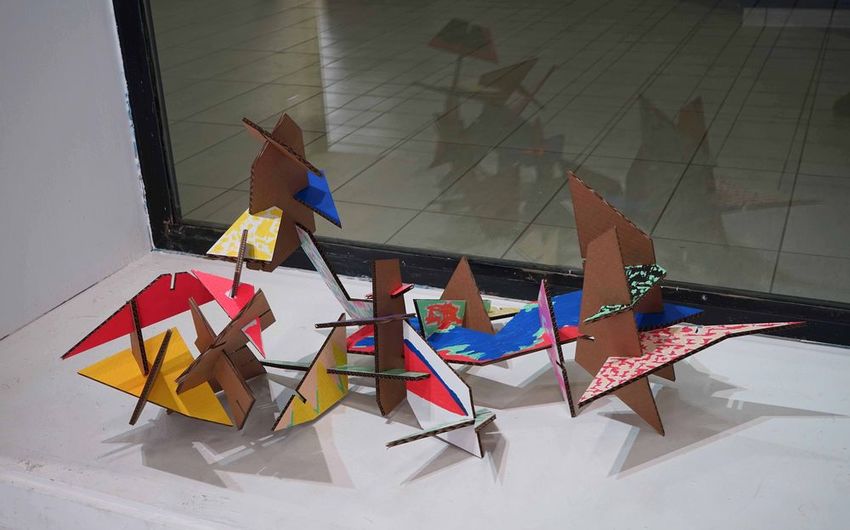 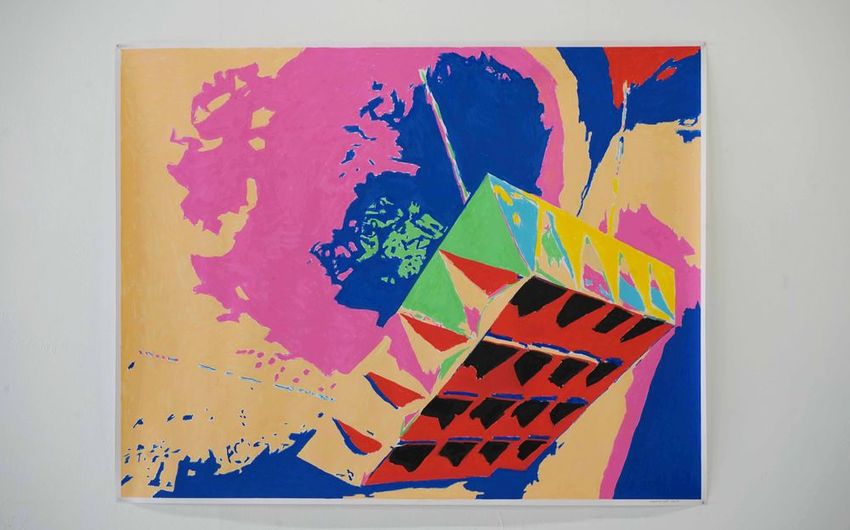 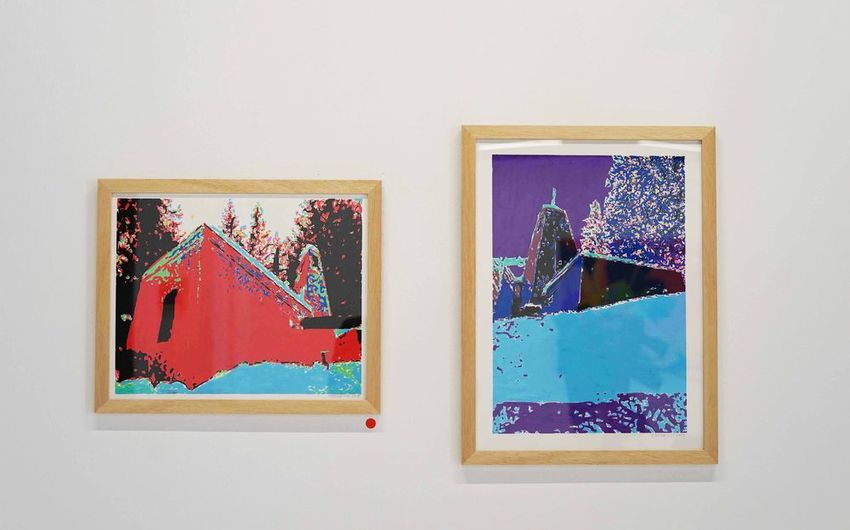 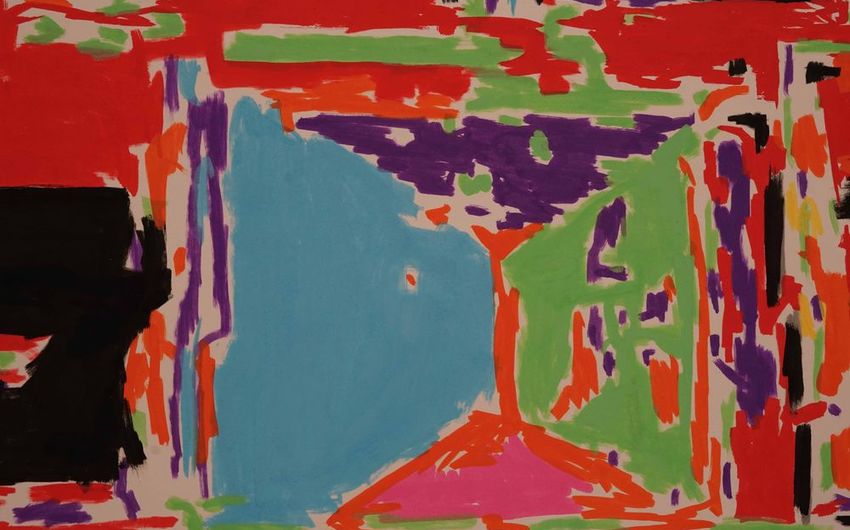 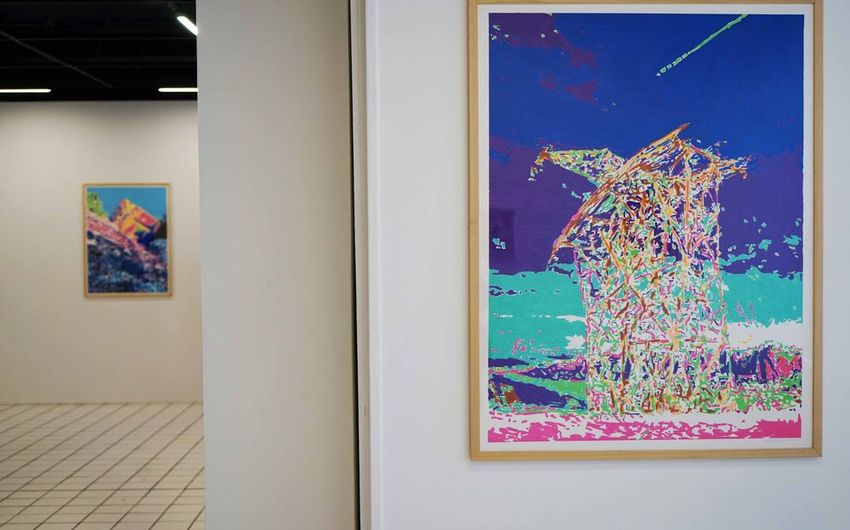 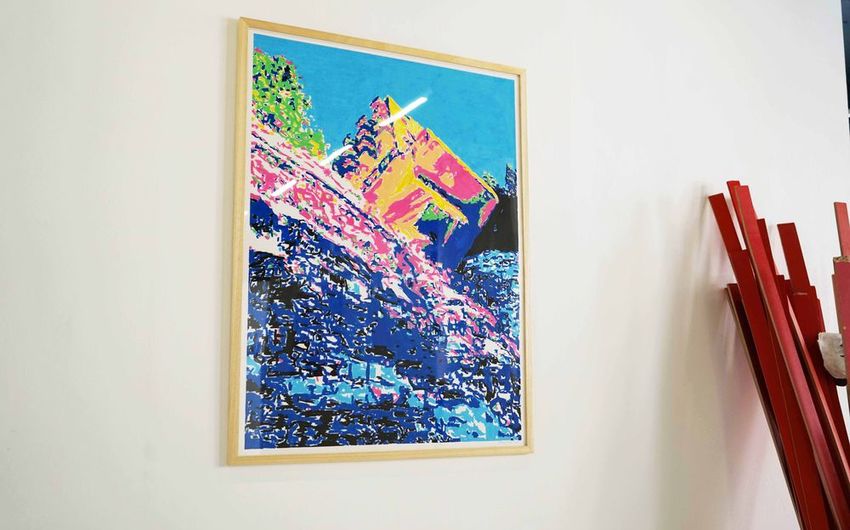 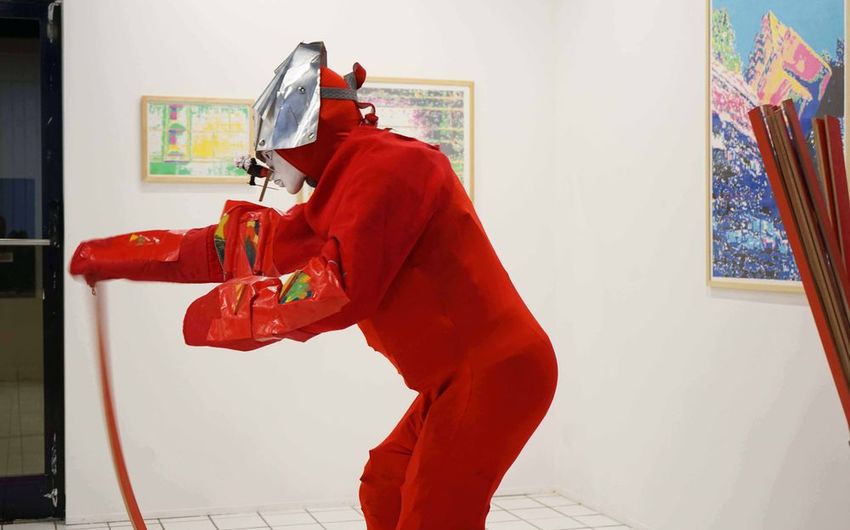 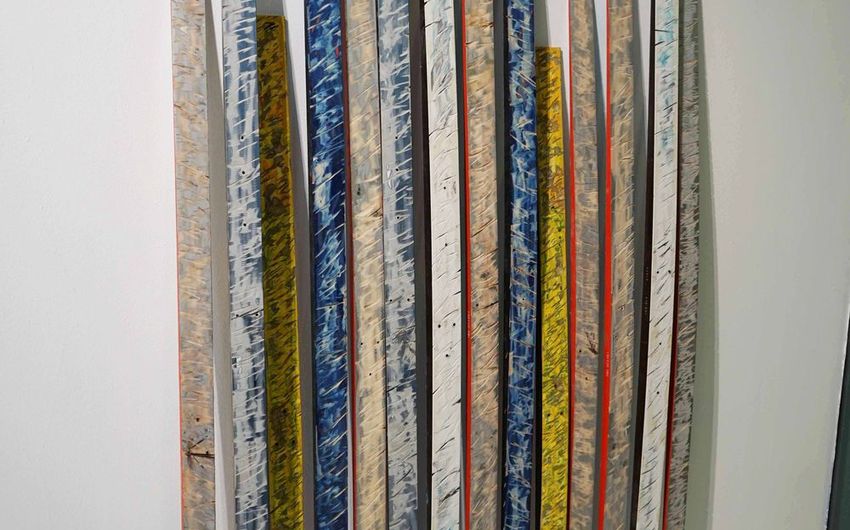 Opus – Like an introduction, or the first notes of a musical composition, a title opens up the perspectives of an exhibition, laying down the foundations onto which the visitor will venture with incertitude – Incertum.

For Latin speakers, or architecture enthusiasts, the term opus incertum refers to a structure built with stones of different shapes and sizes. In this exhibition, Wandrille Duruflé pays tribute to this multiplicity by his choice of techniques (felt pens, screen printing, installation art), colours (using a clever mix of saturated cold and warm hues) and movements (flat tints, pointillism/pixelism, cutting, sticking, direct carving etc.). Nevertheless, each element integrates with the others and contributes to the whole; a fresh set of stones in the rich history of the resort.

The very first exhibit (Titre, 2019) – an installation composed of fourteen skis – is a reference to Duruflé’s main sporting activity. The ends of the skis have been cut off to mask their function and highlight their shape. They have been painted in different colours and, while the range of colours may not be rich, it presents a harmony which is present throughout the exhibition. Duruflé has minimised their differences while still managing to create a heterogenous structure which is symptomatic of the diversity of skiing and the cultural strata of the resort.

The same applies to the subjects chosen for the twelve felt pen drawings. Wandrille Duruflé alternates (or integrates) the emblematic Bauhaus architectural style of Marcel Breuel – ‘Le Flaine’1 or ‘La Chapelle’2 – with objects that were designated by Breuel, like ‘L’ascenseur’3 or ‘Le Lustre’4, or even functional elements of the resort such as a lift pylon5 or a safety net6. Rather than focusing on the historical or cultural qualities of architecture, constructions and building materials, Duruflé’s work recognises their physical and plastic properties; their shapes, colours and aesthetic qualities. Even though they may not have the same value, they are all considered equal in their role as thinking objects. In addition, the twelve images of Opus Incertum provide a physical coherence which comes from the artist using the same digital treatment on each one. They are based on photographs taken by Duruflé, which have then been reworked on a computer to give a destructuring or deconstructing effect which he calls a ‘glitch’. The colours are then digitally modified and saturated before being printed on paper. The printing technique accentuates these two effects through its imprecision, while the artist’s use of acrylic felt pens makes perfection impossible to achieve – opus incertum.

Two structures are also part of the exhibition. The smaller one, made from laser-cut cardboard and decorated with felt pens, develops an architectural potential. It is a construction game which Duruflé conceived from a simple sheet of cardboard. Much like Alma Siedhoff-Buscher1 – who in 1924 designed a children’s game for the Am Horn house project – Duruflé has created a series of shapes which slot into one another, giving structure to its space through lines and colours. In Opus Incertum, this game can give the impression that it is a first draft of the two installations (Titre, 2019). However, Duruflé goes beyond this function by distancing the two works through the significance of his artistic gesture. A close look at the wood panels from which the structures are composed reveals imperfections and sinuous lines which the eye inevitably follows. The colour of the panels and the marks left by the tools establish the images by taking away substance and making us see the matter itself. They work much like the white areas which Duruflé plays with in his pictures: increasing the luminosity of the structure and giving prominence to the support. This is again a reference to the architect Marcel Breuer who, in 1969 in Flaine, chose to leave visible the imperfections in the concrete left by the shuttering. These reveal both the method of construction and the plastic qualities of the building materials, letting us see the notes and the chords but also allowing us to play with our own interpretation of his uncertain architectural melody.